If the name Natasha Hunt is new to you, type it into your search engine of choice, and then add the words 'tip tackle' and 'Samoa' for good measure. The result should bring up a video that sums up the England scrum-half's qualities as a Rugby professional better than words ever could.

The video will transport you back to the opening match of Women's Rugby World Cup 2014, and show Hunt picking up possession of the ball deep in Samoan territory. Traveling at speed, her world is suddenly – and quite literally – turned upside down. As she moves forwards, she is met by an immovable Samoan fullback and propelled high into the air, almost in slow-motion. Finally, her diminutive frame crashes back down, reunited with solid ground.

When reminded about it now, she shudders and laughs. "Luckily I'm pretty light, so I didn't offer too much resistance. But taking big hits like that are just part of the Game. I'm so small; everyone hits hard against me. You've just got to believe in yourself, take the bumps and bruises and get back up." 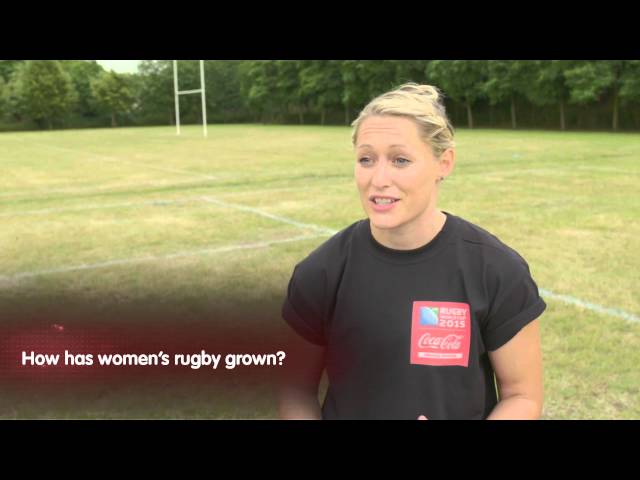 "We knew we would win in 2014. It just felt like it was our time," she smiles. "In any Tournament you have to believe, from the very first moment. You have to believe that whoever you face, you will beat them. We went into that Tournament believing we were good enough to beat anybody. And we were."

We are sat discussing what it takes to win a Rugby World Cup – as a winner in 2014, Natasha Hunt is one of a very select number qualified to offer their insight. "Belief is crucial but it only works if you have the players and the results to back it up," she says. "Our results going into that Tournament had been good. Look at England's men going into Rugby World Cup 2003 – they had the results to back up their belief, and they went on and won. You have to have that belief and you have to have a real togetherness. If you have those things, you can get on a roll and it can all come together. Without them, you don't have a chance."

Those three successive Women's Rugby World Cup Final defeats could so easily have taken their toll on England's collective psyche and left them beaten before they began. "The squad and the staff we had would never have allowed that to happen," she remembers. "They instilled a winning mentality in us and made sure that we learned from those low points. You learn far more from defeat than victory. If you lose a match you scrutinise what went wrong far more than if you win."

A key component of any winning team is communication. As a PE teacher at Sir Graham Balfour School in Stafford, Hunt possessed certain vocal attributes that transferred from the playing fields to the eye of the storm with England.

Natasha Hunt left the teaching profession last autumn. Though sad to leave her colleagues and the kids behind, she was very happy to be leaving — she was one of 20 players awarded a professional contract by the Rugby Football Union. "That was amazing," she says. "I think it reflects that the interest in the Game has just built and built and we’re now in a very strong position. We've got the Olympics coming up next year, then Rugby World Cup 2017 in Ireland and we’re building very well."

Hunt has been ideally placed to see how the Game has grown at a grassroots level. "When I first joined the school, Rugby wasn't even a part of the curriculum and nobody really played," she recalls. "But then, slowly, more and more Rugby balls began to appear in the playground. It eventually built to the point that when we won the Tournament, so many of the kids were like, 'Miss, Miss, we saw you on the television!' That was such a buzz to be part of that and play a part in helping the Game to grow."

With Rugby World Cup 2015 now upon us, the 26-year-old has split emotions. "I'm incredibly jealous of the men's team," she smiles. "I wish it was us getting ready for it and feeling the excitement again. But equally, I can't wait just to sit back and watch it unfold. It should be incredible. The atmosphere in this country should be amazing. I've actually got tickets for the Final at Twickenham. I just hope England can get there and then win the thing."

She is clearly not alone.

This article was commissioned via NewsCred's NewsRoom and written by freelance contributor Nick Harper.