Mike Tindall: How To Win A Rugby World Cup

Mike Tindall is 36 years old and has the face – and most famously the nose – of a battle-hardened warrior. And yet right now, The Warrior is grinning like an excitable child on Christmas morning.

The former England centre has just been asked who he thinks will win the upcoming Rugby World Cup 2015, a question he's surely been asked before and will be asked again before the Tournament begins on September 18. Yet at the mere mention of its name, an excitable grin spreads from ear to ear.

"Oh, I cannot wait," he beams. "I cannot wait. I think England are in a very, very strong position. They've made Twickenham a fortress, which could be crucial, and as long as they can come out on top from their group, I think they've got a real chance of competing in the Final. Obviously, if they finish second, that's a whole different proposition..." 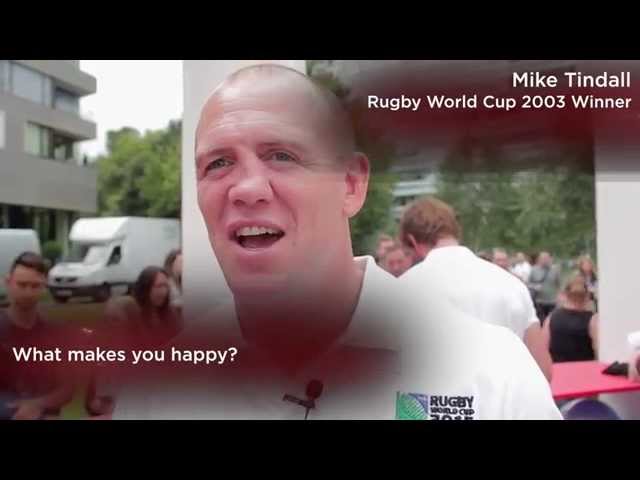 With this thought, his brain goes into overdrive. "That would be, what, A2 versus B1, so South Africa in the quarters… then New Zealand in the semis? And then more than likely Australia in the Final?" He lets that thought hang in the air. Then smiles and shakes his head. "If England win this Tournament by beating those three then they will have deserved it, but can you really see that happening?"

Whatever happens, and however the Tournament plays out, clearly Mike Tindall cannot wait. "I'm incredibly excited," he confirms again, unnecessarily. "I was blown away by London 2012 and I want this to be the same kind of global spectacle. I want it to inspire people. It should be amazing."

Back To The Future

Clearly happy to look forward, Mike Tindall will surely never, ever tire of looking back. Rugby World Cup 2003 made legends of the Englishmen who lifted the Webb Ellis Cup on Australian soil. It is the reason why now, 12 years on, complete strangers ask Tindall for an autograph or a photograph as he sits in a café in central London, answering our questions.

Ever present in all bar one of their seven matches Down Under, Tindall was a central figure as England disposed of Georgia, South Africa, Samoa and Uruguay in Pool C, then Wales, France and finally, gloriously, Australia in the Final. Despite taking great pleasure in recounting how that campaign unfolded, the exuberant smile has been replaced by his game face.

"We expected to win that World Cup and it wasn't the arrogance it was portrayed as," he says. "You go into a World Cup unbeaten for three years. You go there knowing you can beat anyone because you have already beaten everyone. That gives you a belief that you can win, but you only get that true belief by actually having the results to back it up. We were in a unique position of knowing that even if we were 15-0 down, we could come back and win it. That gave us incredible confidence going into that Tournament."

The secret of England's success was no secret at all. They had a coach willing to push the boundaries in terms of preparation, they had the most dependable kicker in Rugby and they had a team willing, and probably able, to run through brick walls for one another. One of Tindall's team-mates had claimed the squad was fuelled by an inner anger. "I'm not sure it was anger," he smiles, "though I know what he means. I think it was more a fiercely competitive edge. We were all willing to put ourselves in a bad situation for the team, every one of us. And that to me was absolutely key."

Does he see any similarities between the 2003 team and England's 2015 squad? "I think the composition is noticeably different," he replies. "We had a squad that blended youth with experience, and we went on a journey and we grew and developed together over time. This England team has done it a different way because rather than blood one or two new players, they've gone all in and embraced youth, which they've had to do because of injuries."

Have they made too many changes? "Who knows, time will tell," he shrugs. "What they have in their favour is a fearlessness, which is great to see. But the downside of that is that they need to learn to play with discipline, they need to learn not to give cheap penalties away, as they did in the Six Nations…"

All this talk of 2015 has reignited Tindall's smile. Like a small boy in the schoolyard, swapping theories with his friends, he has the Tournament all mapped out. "I've literally mapped it all out on a chart," he laughs. "That's a bit sad, isn't it? But look, if England can top Group A, they'll get to the Final and face, well, it's got to be New Zealand or South Africa, hasn't it. But if England only finish second, they face B1 and then that becomes an incredibly tough run to get to the Final. England can beat anyone on their day, but it's hard to see them winning three back-to-back matches of that magnitude."

Clearly Tindall's heart says England, albeit with a number of caveats, but what of his head? "My head says one of three teams can win it. England, New Zealand and South Africa – South Africa have the players, they have the ability to change their game and they have the experience and I have a strong feeling for them."

That sounds like we finally have our answer, until… "But then there's New Zealand. Obviously there's New Zealand. You can throw the kitchen sink at them and they can still beat you. And Australia – they seem to be rediscovering some form at a good time. And Ireland… Ireland…"

You can almost hear the cogs whirring in Mike Tindall's head now, as he considers the options. So many options. "Ireland are the best bet of the other home nations," he smiles, aware that he still hasn't actually answered the question. "They win their group and hopefully they'll meet England in a cracking semi-final… Like I said, it should be absolutely enthralling and I really cannot wait."

As he shakes hands and heads off into the crowds, this much is clear; Mike Tindall really cannot wait for Rugby World Cup 2015. Luckily, his wait – and ours – is almost over.

This article was commissioned via NewsCred's NewsRoom and written by freelance contributor Nick Harper.