Games time in real time: inside The Company’s Rio newsroom

It’s the morning after opening ceremonies for the 2016 Rio Olympic Games dazzled thousands of fans inside Maracanã Stadium and millions more around the world with a stunning celebration of both Brazil and the Olympic spirit, and The Company’s social media newsroom is abuzz with both pride and purpose.

A team of marketers from the company’s Brazil and Atlanta offices keeps an eye on a wall of monitors, some of which are broadcasting the day’s competition while others track social media posts about the Olympic Games and Coca-Cola. Several team members peck away at laptops, and others huddle around tables, scribbling ideas in Portuguese.

Their job? To find ways to tastefully tap into trending conversation with timely and relevant Coca-Cola content every day during the Games.

“This is our first truly global real-time marketing operation,” said Adriana Knackfuss, integrated marketing communications (IMC) director for Coca-Cola Brazil. “We listen to what consumers are talking about, then generate content and amplify this content with digital media.” 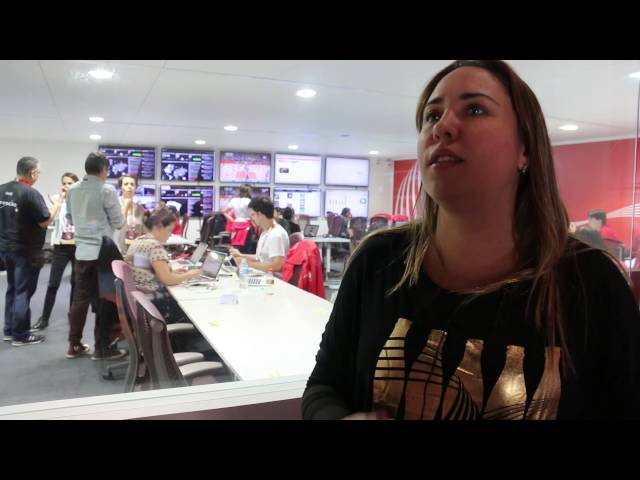 The space is tucked inside Parada Coca-Cola – a happening hotspot for teens in a converted warehouse in downtown Rio's hip in hip Praça Mauá district. A similar hub in São Paulo is focused on POWERADE content. The full operation is powered by a total team of 100 social media analysts, strategists and creatives.

“In these two years, we’ve been improving our real-time capabilities and partnerships,” Knackfuss said. “For example, in this room, we have representatives from Coke and our agencies, but also from Google, Facebook and Twitter. They’re here because it’s not only a matter of understanding the importance of the right content, but also the channels we should use.”

Each morning at 10 a.m., the team huddles to discuss hits, misses and learnings from the day before. They also review trending topics and map out a plan and responsibilities for the next 24 hours.

Social content coming out of the Rio newsroom is meant to complement the company’s global #ThatsGold campaign – which includes TV commercials, outdoor ads and more – and links its messaging to in-the-moment conversation.

“Real-time marketing is all about leveraging the context – understanding what people are talking about and what’s important in their lives right now, and connecting our campaign with this context,” Knackfuss.

And the team won’t have to go too far to find inspiration. Parada Coca-Cola will welcome an estimated 150,000 teens during the Games for concerts, celebrity and athlete appearances, and an interactive #ThatsGold experience.

“We are in the heart of a place that is the heart of the city, where fans will experience the campaign in a tangible way,” Knackfuss said. “Up front, there is the brand experience and here in the back here our team is leveraging what’s going on down the hall. This is the first time we’ve combined a brand experience with real-time marketing.”

Take a look at the real-time marketing inside our UEFA EURO 2016 war room.

RECOMMENDED FOR YOU
Inside 's war room: How we're playing ball with real-time marketing for UEFA EURO 2016™