Collectors Fair 2016: Fans flock to London to share their love of

Sleek designer bottles, classic vintage cans, unique artwork and retro merchandise. The Collectors Fair in London is a cornucopia of Coke memorabilia, bringing together collectors and fans from all over the world to share their love of .

Wandering through the Collectors Fair in London, you can’t help but stop and admire the incredible diversity of the pieces on display, including: bottles, cans, keyrings, playing cards, games, 3D glasses, jewellery, signage, pins and trays and drinking glasses. After all, Coca-Cola has been around for 130 years this year and has been at the forefront of merchandising from the beginning. 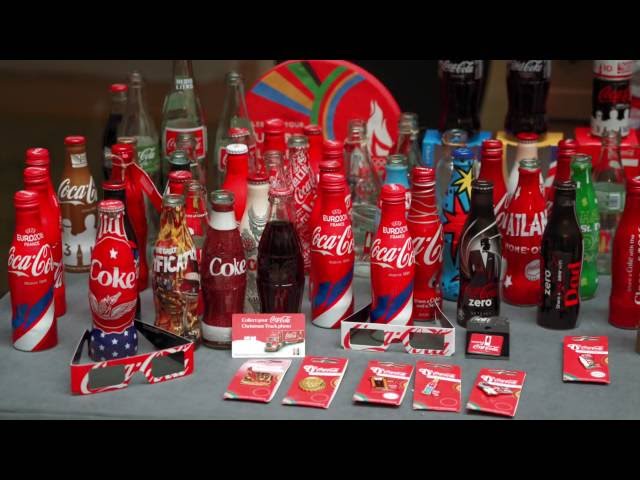 A glimpse into history

As collector Daniel Morris says: “If you can imagine it, it probably exists”. And today is a prime example of that. Taking place next door to our headquarters on Wimpole Street in London, the tables are crammed full of carefully curated bottles and cans of every colour, shape, size and design. Some even celebrate historical events, from the Olympic Games to films and fashion. Every item is a little bit of history.

Ltd edition bottles, retro adverts and even Christmas merchandise are on display here at the #cokecollectors fair! pic.twitter.com/j6pHZwV2Gt

Collectors and fans from around the world

These unusual and rare pieces are the reason why collectors from the UK, France, Germany, Italy, Spain, Belgium, Netherlands and even South America have come together to buy, trade and sell their beloved Coke memorabilia. Hundreds of Coca-Cola fans across the globe have joined them – many from the UK and Ireland, but also from as far away as Denmark, America and Thailand.

"My wife and I have come all the way from Uruguay for just three just days, specifically for the fair.”
- Roberto Arambillet, Collector


Belgian exhibitor, Johan van Mierlo, is displaying a small selection of his vast collection. He runs a small shop in Brussels headquarters and is constantly collecting. A couple of his rarer items he has on display are 2 glass bottles from 1976. “These are two 40-year-old gallon bottles,” says Johan, showing us two beautiful glass jugs, which are carefully decorated with watercolour-style painting of horses and the classic logo. “These wouldn’t have contained the drink, just the concentrate so it could be easily shipped to the stores.”

Coke collector, Roberto Arambillet, has travelled with part of his collection all the way from South America. “I couldn’t bring it all today, but I have the biggest collection in my country. My wife and I have come all the way from Uruguay specifically for the Collectors Fair today.”

View photos from the 2016 Collectors Fair in London


Collectors and fans Sarinras Chainonthi and Theerayut Choeichomsri have travelled all the way from Thailand for the Collectors Fair. “We’re really impressed with the event today,” says Theerayut. “I’ve been collecting since 1992, but I’ve seen some cans and bottles here that we never knew existed.” Sarinras says their home is now full of memorabilia. “We have about 3,000 cans!” she says.

Self-proclaimed “dedicated fan”, Alexandra Bell, says she’s had the date booked in her diary for months. Why does she love ? “It not only tastes great,” says Alexandra. “But I love the styling of the brand. The consistency of the colours and the look and feel -- it’s a classic brand. Today’s been fantastic. Everyone is so welcoming and eager to explain the background and history of their pieces to you.”

“I’ve been collecting since 1992, but I’ve seen some cans and bottles here today that I never knew existed”
- Theerayut Choeichomsri, fan from Thailand

As well as the many collectors, memorabilia and artefacts on display, there was also a raffle raising money for Special Olympics Great Britain, a sports charity for those with intellectual learning disabilities, which Coca Cola Great Britain is a long-term founder partner of. The raffle offered up prizes such as limited edition 130th anniversary bottles, Zero Sugar cans signed by singer Rita Ora, and a Marvel-themed case of six mini cans featuring superheroes such as Hulk, Ant-Man, Black Widow, Captain America, Iron Man and Falcon.

Ecommerce marketing manager, Daniel Morris, has been collecting for 15 years. He started collecting after he had his bedroom decorated with a border. He started buying things to build up the theme but his collection snowballed.“What I love about is how innovative the brand is. I’ve got box sets that you open up and there are drawers and bits pop out. I’ve got glow-in-the-dark bottles. The creativity and detail is incredible.”

Daniel loves Coke so much that he even had bottles for his wedding made for all the guests as place cards. “We’ve still got our one, which say ‘bride and groom’,” says Daniel. “They’re priceless. I’ll never part with those no matter how much I’m offered!”

Find out more about the 130-year history of .

RECOMMENDED FOR YOU
'People Could Offer Me Stupid Amounts of Money and I Wouldn't Sell': Coke Collector Dave Allen Reveals Why He'll Never Part with His Memorabilia