When Seth Goldman co-founded Honest in 1998, his mission was to produce high-quality freshly brewed tea, bottle it and rack it up in shop refrigerators across the US. With a passion for social responsibility, mission-driven entrepreneurship and a critical investment from The Company, he succeeded. Here, he outlines the philosophy behind the brand. He also explains how Honest is launching three new herbal teas in Britain.

Honest is all about authenticity, transparency and simplicity. We’re a mission-driven business. What we’re about is connecting people to nature, offering them healthier drinks and having a positive impact on the communities we source our ingredients from.

We’re always challenging ourselves to do more. That’s why I’m very excited to be bringing three of our bottled herbal teas to Britain. I know that British folks know their tea. So what I really want to do is introduce them to a nice refreshing drink that isn’t so tea-forward, but is still a low-calorie, organic drink with great flavour. 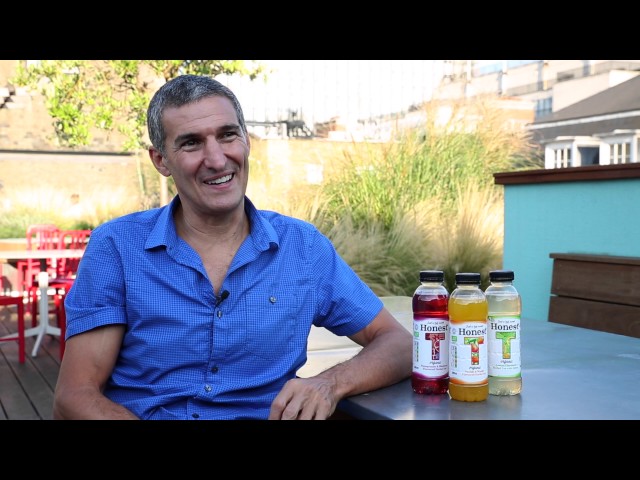 Our Pomegranate & Blueberry Flavoured Herbal Tea is one of our top sellers in the US. It’s a nice combination. It’s not a juice drink, it’s a herbal tea with juice in it. What we found when we added the herbal ingredients to the drink is that they give a really nice emphasis to the flavour.

Our Orange & Mango Flavoured Herbal Tea is a delicious blend of orange, white grape, and lemon and mango flavours blended with brewed lemon balm herbal tea. And our Lemon Flavoured Herbal Tea with Honey is a light citrus taste and contains an herbal infusion of lemon myrtle and organic green tea.

These three drinks are a good way of introducing British tea-drinkers to the Honest brand. I have to pinch myself to remember that we’ve actually been around now for almost 20 years.

It all started back in 1997 when my business partner Barry Nalebuff and I had a light-bulb moment. We had noticed that most of the tea that went into bottled tea in the US was tea dust and fannings, the leftover bits once whole tea leaves had been separated and sold. This meant that most bottled teas in the US were made with some of the lowest quality tea and they were not even brewed.

It was obvious what we should do. And that was to make a bottled tea for the American market using freshly-brewed high-quality tea. Honest Tea, in other words.

Things moved quickly after that. I quit my job, brewed up fresh tea samples in my kitchen in Bethesda, Maryland and got an appointment with the buyer at the local Whole Foods Market. I went along to the meeting with five thermoses of freshly brewed tea and a bottle with a mock-up label. The buyer ordered 15,000 bottles. Suddenly, Barry and I were in business.

Within ten years, we had become the best-selling tea in the natural foods industry in the US. We were at about 23 million in sales and had seen lots of growth. But we didn’t have the ability to scale up to truly nationwide distribution and get into large grocery chain stores like Safeway and Kroger. We needed some serious investment.

The Company partnered with Honest in 2007 and went on to acquire the company in 2011. Our growth has been dramatically accelerated as a result. In 2007 we were in about 15,000 stores across the US. Today, we’re in about 100,000 stores. We operate as an independent business unit within . And that’s great.

Outside the London Eye for the launch of Honest in Great Britain.

For me, Honest has always been about building a socially responsible business. A big part of that has to do with investing in suppliers through fair trade. Most of the time, we have a direct connection with the supplier, meaning I’ve travelled to meet them or someone from the company has travelled to meet them. And we learn from them.

I remember I had a wonderful trip to one of our green tea suppliers in China. It was a multi-legged trip to this inland province. When I finally came to what I thought was the end of the journey, I was faced with a river. I asked my host where the tea-bushes were. And he said they were on the other side of the river. I asked him where the bridge was, and he said there was no bridge.

By now, I thought I was in one of those Zen parables. And then a guy came up in a bamboo raft and took us over to this beautiful tea garden. Once we got there, my host explained the reason they didn’t have a bridge was simple. A bridge would bring a road, a road would bring infrastructure and infrastructure would bring pollution to the tea garden. So that was a real lesson for me.

My advice to anyone wanting to build a business is to make it about a belief system. The world’s too complicated and life’s too short to just try to play the market.

For the latest news about the brand visit: drinkhonest.co.uk

Head over to our drinks section for nutritional information about Honest drinks.

Seth Goldman is the TeaEO and co-founder of Honest. He is the co-author, along with Barry Nalebuff, of the New York Times® bestselling start-up manifesto book, Mission in a Bottle: The Honest Guide to Doing Business Differently - and Succeeding.